Convent and Church of Our Lady of Loreto

The convent is a foundation of discalced Augustinian cloistered nuns (1564).

At the time the church was inaugurated Dénia was a marquisate, being the Marquis of Dénia, Mr. Francisco Sandoval y Rojas, also Duke of Lerma and a favourite of King Phillip III of Spain. The King, the Duke of Lerma and other outstanding personalities of the nobility and the church of that day and age attended the convent's inauguration celebrations.

The architectonic collection includes the church, cloister and the cloister's southern wing.

You can reach the later period small church (1691) when religious services are being held.

The exterior is austere and measured. Only two façades break its monotony. The main one is on Sant Narcís Street and the side one is in Loreto Street. It has a latin cross plan inscribed in a rectangle with chapels which have no communication with each other and a wide transept with a dome over pendentives. It is covered with a barrel vault with lunettes and the chapels have a truncated dome. The elevation is made up of Doric pilasters, which were rebuilt after 1939. The altarpiece of the Santíssima Sang (Most Holy Blood) is in the high altar. There is also a contemporary sculpture of Our Lady of Sorrows, sculpted in melis pinewood in early 1941. 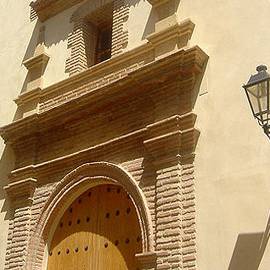