Primarily comprised by the streets: Calles Loreto, Cavallers, Major, Sant Josep and adjacent streets. This barrio was integrated into the city in the 16th – 17th Century and still conserves an interesting set of houses built in the late 18th  and 19th Centuries, which symbolize the wealth and the prosperous middle class that arose due to the raisin trade phenomenon.

We recommend a stroll in this barrio to visit the calle Cavallers where we find the Ethnology Museum – a typical sample of the Bourgeois house which reveals the city’s evolution during the 19th Century and the importance of the raisin trade -, the calle Loreto, a pedestrian street with bars, street cafes, restaurants, and shops,  the Convent and the Church of Nuestra Señora de Loreto (you may visit this church), as well as explore the calles Major and Sant Josep, etc. 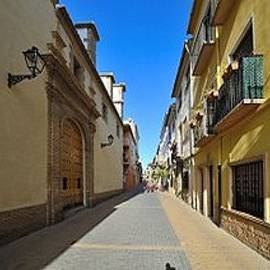