Pleasant stroll along the seashore, bordering the rocky coastline of Les Rotes

INCLINE: flat as we border the coastline, except for ramps when crossing over gullies. The ascent up to Gerro Tower, located 125 metres above sea level, starts as of kilometre 4.

ACCESSIBILITY: apt for wheelchairs mainly along the Marineta Cassiana seafront. It is possible to continue along asphalt, dirt and stone pavement until reaching the Sendra Restaurant.

- Marineta Cassiana seafront, from which to admire shallow, warm waters. - - Accessible bathing areas for wheelchair users during summer, with several services for persons with reduced mobility.

Then follows a succession of rocky coves of whimsical shapes offering a pleasant contrast of colours. It is likely that you will contemplate marine birds, like seagulls and cormorants, sitting upon rock isles.

The sea floors are home to a great wealth of flora and fauna, justifying its declaration as Marine Protected Reserve of the San Antonio Cape.

Las Rotas hosts 3 signposted flora micro reserves that are home to autochthonous plants that only grow at highly specific points. Refer to the informative panels.

The Gerro Watchtower is visible from the seafront, indicating the end of the route. An excellent, panoramic view of the Dénia bay, the coast of Les Rotes and the San Antonio Cape are contemplated from this Watchtower.

This tower, measuring 13.5 m in height, is part of the network of fortifications built along the coast during the 16th century to prevent constant incursions by Berber pirates.

The circular tower with a conical trunk is comprised of two, superimposed bodies, the bottom one buttressing the structure. The door for entering inside it is elevated from the base, and was accessible using a mobile ladder. Crowned by two parapets.  We point out the seal of arms of Charles V, with 4 bars, crown of the old Kingdom of Valencia and the double-headed eagle of the House of Austria. The different levels of its interior are communicated through an aperture accessible using a mobile ladder or, simply, a rope.

Proof exists of another tower located where the San Antonio lighthouse currently stands, in addition to the Almadrava Tower (Route The towers used visual communications, though there were also other means, like signal mirrors, fire, etc. Guards both custodied these towers and transferred to other towers or citadels to alert of any danger. 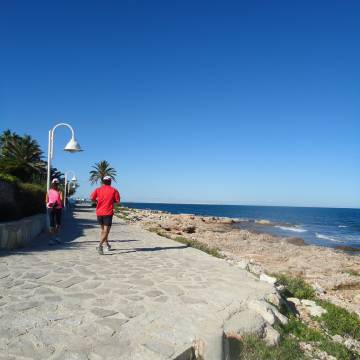